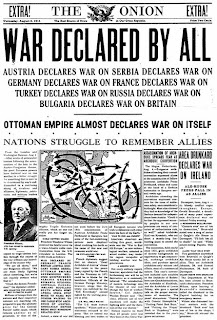 We declare war, endless wars on drugs, poverty, corruption, crime, cancer, rust and even toilet bowl rings. Our American English language is peppered with the language of war.

This shift from war defining everything to the standard of peace will take creative thinking. It may produce some ridiculous sounding ideas. But I am reminded of the old adage about nonviolence used for social change…at first it look irrational but doesn’t take long before, compared to the consequences of war, looks very rational indeed.

Posted by Jon’s Journeys with Peace at 3:33 PM

Please see my web page at:

Where is Jon Now?

Jon’s Journeys with Peace
Manheim, Pennsylvania, United States
Seeking solutions through imagination and creativity, I am a big picture thinker and base my actions and recommendations on restorative practices. I have more than 20 years experience in Africa and Asia facilitating strategic peacebuilding and development from a partner and relational orientation through field assignments, leadership postings and regional levels portfolios.

Places I have been